What about pieces for Wadsworth and Yvette? Would it be pink and yellow-green, like their glowing-colors on the cover? I like pink for Yvette, but maybe black for Wadsworth would work better?
Top

I made the cards all the same size, i just made the image of all of them together different sizes. The room cards are larger here mainly so that the rooms can be seen better. If they were to ever be printed out, all the cards are the same dimensions.

Green wrote:What about pieces for Wadsworth and Yvette? Would it be pink and yellow-green, like their glowing-colors on the cover? I like pink for Yvette, but maybe black for Wadsworth would work better?

I would just use the Gray and Peach tokens from Master Detective. The blond hardwood is a nice subtle tribute to the delicacy and blondness of Yvette, while the Gray is a good, sober neutral for Wadsworth.
Top

Wow. At the risk of bumping this thread ... what happened to this project?

Considering 2010 is the 25th Anniversary, this would be a good time to finish this game. You really have to wonder why Parker Brothers didn't put out a version of the game to match the movie, especially considering it was a Christmas release.

I recently picked up a copy of The Clue Story Book with the Boddy Mansion layout and went looking for some info on here, which is how I turned up this thread. What I noticed, was that the layout was roughly hand drawn, and does not appear to be made from the architectural blueprints drafted for the set construction. Slightly disappointed, but it's otherwise very nice. Really highlights how far computers have come since then, though. Unfortunately it is split across the two inside covers of the book and had to be scanned and reconstructed as one sheet to make it useable as a gameboard.

One thing I noticed is that a lot of the minor details are missing from it, some doors, windows, stairs and built-in cabinets. Also, the exterior of the house in no way matches the the interior configuration. There is a window just to the right of the front door, which matches no interior rooms. But nothing highlights this like the rear of the house. Clearly, the Ballroom was tacked onto the artwork to complete the floorplan, since it was never part of the original set.

Unfortunately, what is in the movie does not match the floorplan at all. So I took the liberty of modifying it to match what was depicted. First, there is a window in the Bathroom, that opens up right into the Ballroom. Then there's the problem of the Secret Passage and exterior wall seen from the Conservatory. So I decided that the ballroom doors were originally rear exterior doors onto a patio that was since converted to a ballroom, which sort of explains the stonework which is out of place with the rest of the house. Then I rotated the Ballroom 90 degrees with a hallway connecting to the doors and the stone arch we see next to the ligthswitch in the movie. The space outside the bathroom then becomes a skylight/airshaft courtyard, common in older construction of this type.

Next I'm going to try to derive the proper scale from the hall floor tiles which appear to be 24-inch squares surrounded by a 3" or 4" border. I have been trying to say here for some time that the inside doesn't match the outside, and been pooh-poohed soundly from all sides. Thank you very much, sir!

Do you think that, in the kitchen, there is that diagonal wall, on that side of the bathroom, or did they in the movie bring that corner out to a solid ninety degrees to mask the diagonal?

I also thought of the airshaft solution to the bathroom window problem, and I love the skillful way you depicted it. Yet I'm not sure that the ballroom needs to have steps down. I mean, basically there is no need for that raised section in back at all, but even less so if none of the rooms back there are on the same plane.

And then I'm pretty sure there is a tree outside the window at the top of the landing. I don't know if an airshaft would support it, but I could be completely wrong.
It's discouraging to think how many people are shocked by honesty and how few by deceit. -- Blithe Spirit, Noel Coward.
Top

Lord Caspen wrote:I have been trying to say here for some time that the inside doesn't match the outside

It's hard to imagine anyone disputing that. It's a movie set and they ultimately did what was necessary cinematically. The upstairs is the perfect example: In order for the attic to be where it was depicted, it would have to be suspended out over the Conservatory by massive cantilever arms, not only pointless, but totally negating the purposes of the conservatory. Perhaps that is why everything was dead in there?

Lord Caspen wrote:Do you think that, in the kitchen, there is that diagonal wall, on that side of the bathroom,

Yes, there is one shot where Christopher Lloyd is pressed up against that wall. If it were a 90 degree corner, you would not be able to see him from that angel. My guess is that it was intentionally designed that way to give better line-of-site to the kitchen entrance.


Lord Caspen wrote:I also thought of the airshaft solution to the bathroom window problem,...Yet I'm not sure that the ballroom needs to have steps down.

Yes, it seems to be the only way to solve the massively glaring problem of the ballroom. Agreed the Ballroom doesn't need to need to have steps down. I did that assuming an original patio at ground level and to have some outdoor access from the Ballroom, but reconsidering those old houses, it was most likely a raised deck, with the Conservatory stairs being the original method to access the grounds before the greenhouse was built, which was clearly an add-on.


Lord Caspen wrote:And then I'm pretty sure there is a tree outside the window at the top of the landing. I don't know if an airshaft would support it,.

I'm pretty sure you are right. That actually bodes well for the airshaft. I only clearly saw a branch during one display of lightening, but definitely one growing right in the middle of the Ballroom! LOL And it appeared to be a pine tree. I was wondering what might be growing in the skylight/airshaft to provide a "view" and the answer is the tree. Obviously if the ballroom is raised, the tree base is submerged several feet below the floor level to exposed earth. A pine tree would keep a fairly thin trunk making the space adequate, not to mention keeping the air fragrant. But there would have to be good drainage.
Last edited by Murder by Death on Wed Oct 28, 2009 2:03 pm, edited 2 times in total.
Top

I completely forgot about this thread

Earlier thisn year, I had a proposal of making the movie into a board game version, and completely forgot about this thread, and the game as well.

One version of Clue I'd love to see is the board game edition of the movie.
Oh, it's England. Croquet on the lawn, tea in silver teapots, sherry before dinner. One simply has to maintain one's standards!
Top

The cards and floorplan are beautifully done! WONDERFUL!

I wish there WAS a Clue game like this...
Top

So I calculated the dimensions and I'm pretty sure the Hall tiles are 24" square (4, 12" tiles) separated by 4" thick boarders. This was in part derived by looking at shoe sizes against the tiles. So unless the men all had size 9 shoes, then they used common 12" tiles throughout the set. Plus, those dimensions more or less correspond to conventional door sizes.

So using those dimensions, I confirmed that the tile layout more or less conforms to that of the movie set, as well as the fact that this floorplan is poorly drawn. But the Hall tiles also seem to make the appropriate sized playing spaces as well. Click here for a grid map overlaid onto the set.

It uses a two-foot square grid across the mansion floorplan and allows an approximate calculation of the size of any room.

Finally it shows that the ground floor alone is over 3600 square feet.
Top

I was just thinking about this edition again ... If Hasbro had owned Clue in 1985, I wonder if the 1986 edition would have had more of a marketing tie-in with the movie since that seems to be their current agenda?

In other words, would they have created a standard edition using Tim Curry, et al as the suspects?

In which case, using the traditional board design, give us the room designs from the movie, or even photographs a la the 1972/79 edition it replaced?

If they had done this, what about replacing the Hall with the Attic to tie it into the movie? Arguably there is no need for a Hall on the gameboard since none of the characters actually enter the house and all start on their own spaces. The board pathways themselves make up the "Hall" as far as the movie layout is concerned.

The attic is unique to the movie, and featured prominently, unlike the bedroom, nursery, and bathrooms which are barely seen.

Alternately, the Ballroom could also be replaced as well, or in addition to, as the Ballroom is barely featured at all. (However, the ballroom is the one room that really separates the Mansion from just a house) -- but if so, maybe replace the ballroom with the cellar which was a much more important room in the movie, and make the center space the ballroom (since that room did not actually figure at all in the movie) -- though I could see that causing some confusion ...
Top

Thought I'd move this over to this thread where we were discussing it a while back.

I always thought a straight-up floorplan would work with the "Hall" being just the entrance way, with the game board spaces all of the central hallway. The Evidence envelope would go on the stairs. A little something I threw together. I've already been obsessed with creating a Clue Mansion floor plan that is true to the Game Board. This is as close as my brain could come up with.

This looks interesting to continue on this theme: 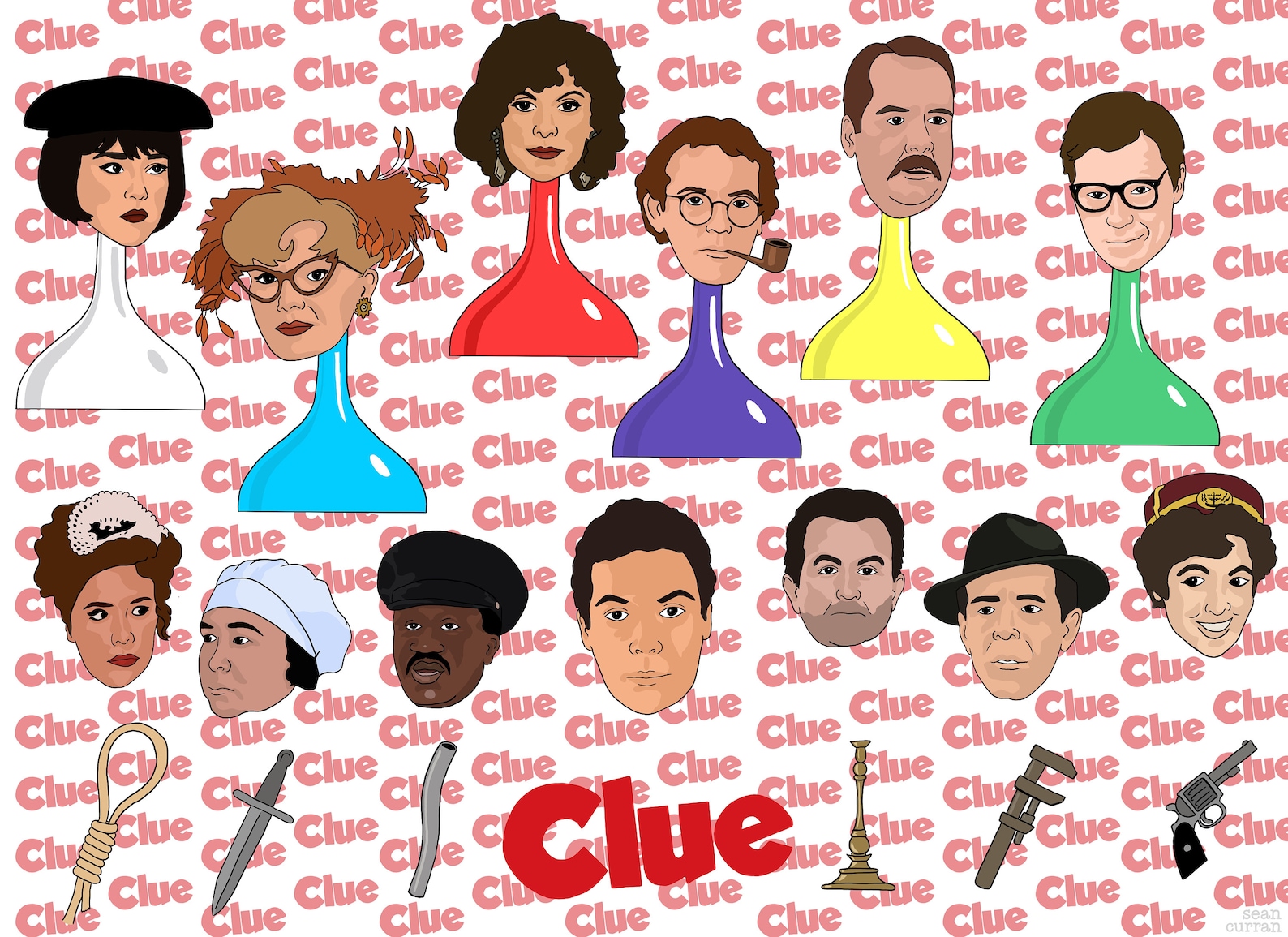