Like Frontgate's product from last Christmas, it has a nice vintage Bookshelf box. I do like the muted color scheme, and the metal accents. All things considered this appears to be based on the early editions, using the original 1949 board design, 1963 box Logo, and 1956 weapons set, with a metal rope, first introduced by Winning Moves. Not really sure it's worth the $69 price tag ... Just not enough new or unique about it.

Of course this was already shown a year ago as a product marketed by Winning Solutions http://theartofmurder.com/forums/viewto ... 644#114644 , but now we see who bought it, as well as the subtle design changes RH ordered from the original prototypes.

Why do they picture two candlesticks in the second picture?
Top

They also have two Greens and Whites.

Wouldn't have been better to use the originals then?
Top

The pawn bases seem unnaturally thick. I sort of like the whitish color box, but it would probably get dirty pretty easily. Definitely can't have cheetoh snacks during the Clue party...
How do you know what kind of pictures they are if you're such a lay-dee?
Top

Michael wrote:Definitely can't have cheetoh snacks during the Clue party...

No one was EVER allowed to eat snacks during a game of Clue(do) under my watch.
Top

Michael wrote:Definitely can't have cheetoh snacks during the Clue party...

No one was EVER allowed to eat snacks during a game of Clue(do) under my watch.

Same here, only between games.
Top

Michael, I am SHOCKED that you'd allow the eating of snacks whilst playing Clue(do)!
Top

I can't even remember the last time I played a real game of Clue...
How do you know what kind of pictures they are if you're such a lay-dee?
Top

Life has been so scattered lately
Top

Haha! Same here. Actually, I think I do, and it's probably been five years
Top

Use FFP2011 when checking out to get the discount.
Top

I played around with the Restoration Hardware game for a few minutes in the store today. While I personally don't like it - it feels like it came out of a garage sale - I think the store has really done a great job making the game fit their brand image with the whole sort of rustic chic look. It goes really well with their current line of products. At least they're thinking it through instead of just throwing something out there with no rhyme or reason.
How do you know what kind of pictures they are if you're such a lay-dee?
Top

I got to see all 3 new CLUE games up close today: the grey Restoration Hardware game, the green/brown edition, and the oversized Franklin Mint edition, the latter two of which were at Barnes and Noble.

Now... I only got to see the inside of the Restoration Hardware edition, but the green/brown edition looked identical except for the color scheme.

The jumbo board game sadly doesn't look any good. It appears that the same ugly brown plastic molds were used for the game, only this time the furniture sits on a black base which is attached to the room... I wouldn't put it past them to have used the same spray-painted weapons as well. Definite pass.

As for the bookshelf edition, at $50, the green/brown edition is $20 cheaper than the RH grey edition. While not even worth $50, it IS a lovely game that I would happily pay $30 for. The pieces are VERY heavy. I was immediately impressed by their weight. And the colors on the board were very nice. I like the toned down saturation. It also looks like the cards and pencils come in their own cardboard boxes. While that is certainly not extravagant, it's nice that those pieces won't be sliding around all over the place inside the game box...

I shall wait for it to go down in price and only snatch it up then.
Was it Miss Scarlet with the Candlestick in the Ballroom? Yes... yes it was.
Top

This is amazing ... So Barnes and Nobel are basically selling the same game for a $20 discount? 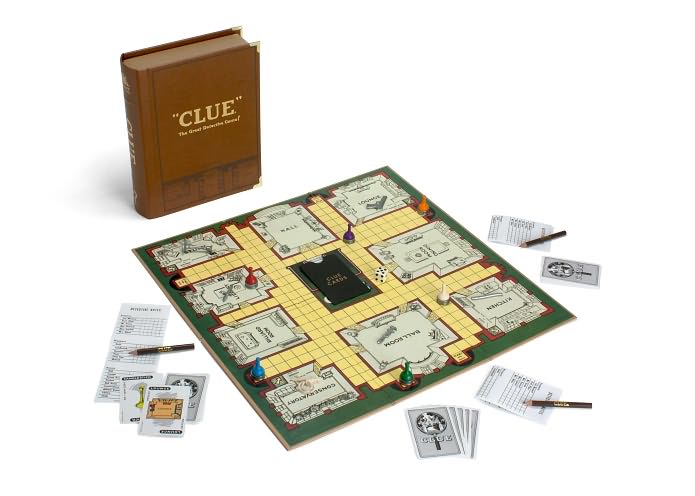 It's curious that they also have the giant clue game too, it sounds like from your description that despite the winning solutions photos, that they chose the cheap route. For $99 it is a nice alternative to the $199 Frontgate deluxe board. http://www.frontgate.com/clue-3a-frontg ... ion/392320


Interestingly it looks like Winning Soloutions now sells directly to the public for $20 more ... 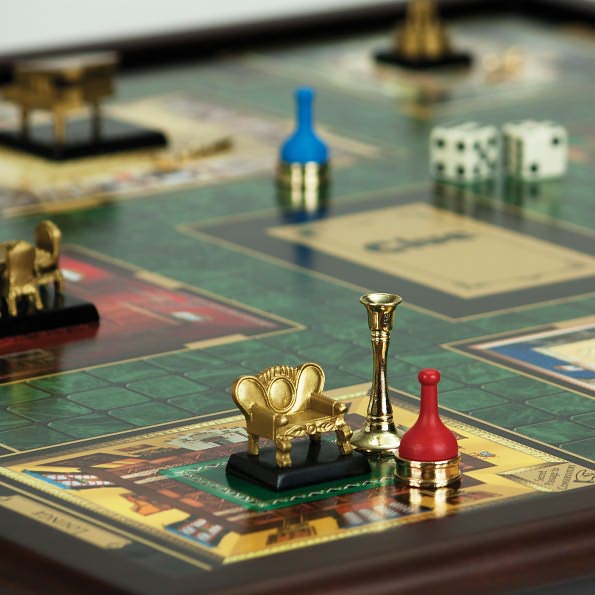 Very nice, the only problem is that Mustard is more Orange then Yellow.
Top

I'm rather startled that an average Clue game is priced at $30.

I remember going to walmart with $10 and that being sufficient.
Top

No, apologies for any confusion ... There are four classic holiday games in this discussion:


cacums wrote:I'm rather startled that an average Clue game is priced at $30.
I remember going to walmart with $10 and that being sufficient.

Not sure I agree with this entirely. True there are no $10 editions of Clue anymore, except possibly on sale. But that's generally true of most things with inflation, there are no $10 Monopoly or Scrabble games either. However, the average price of a standard Clue game is somewhere around $18, if you don't take into account these deluxe editions. DTS sells for about $16.50 at Target, and the classic wood boxed edition for $20. Everything else falls into the themed editions (24, Spies, Family Guy, et al), or deluxe. Even the Winning Moves Classic edition is priced around $20 at most stores, and online deals bring most of these special editions into the same price range.

Still not $10, but hardly $30. Even in the mid-90s when the Franklin Mint and Winning Moves editions came out, they were equally as expensive as those being discussed in this thread (especially when adjusting for inflation), or more, compared to the editions you could pick up at Wal-Mart. Even in the 2000's when there were more special editions than you could keep up with, they were often priced at a minimum three to four times as much as the basic game.
Top

The biggest problem I have is that they seem to simply be recycling the same designs over and over yet charging premium prices. If you wanna charge $30+ for an edition, then give us some new artwork ... Make it worth the price!

The best new edition in the last 10 years was the Frontgate bookshelf edition based on the 1986 game. It was a fresh re-issue, with some nice re-styling. But it was still a pre-existing design. The original price of $60 was just too much. When it ended up on sale for $25, that was about right. Hopefully, they don't continue to follow suit and offer re-dressings of that edition year after year for a premium as well.

Is it really so hard to create some original artwork based on the classic design?
Top
Post Reply
38 posts